This month marks the 35th anniversary of the theatrical release of a guilty pleasure of mine.  On April 15, 1983, the world was introduced

to Flashdance. This epic story about Alex Owens, a welder/exotic dancer who has no formal dance training yet dreams of becoming a professional dancer, stars Jennifer Beals in the lead role and Michael Nouri as her factory boss/love interest. While its plethora of MTV-styled scenes had a very heavy influence on other ’80s favorites of mine like Footloose and Top Gun, this is a movie I only saw once. Thus, it is not the aforementioned guilty pleasure.

No, there was an obscure B-movie released on the exact same day which had a slightly lower budget ($5M, as opposed to Flashdance’s $7M), yet nevertheless caught my attention. It was never destined to win any Academy Awards, and I don’t believe the filmmakers were aiming for that particular bullseye. Their goal was to give moviegoers an entertaining “renegade cop” action flick which simultaneously pays homage to the spaghetti westerns of Clint Eastwood. This film, starring the one and only Chuck Norris, was Lone Wolf McQuade.

The story of J.J. McQuade, a “go it alone” badass Marine veteran turned Texas Ranger, is a troubled one. He’s divorced, has one daughter and lives in a dump of a house in the Texas desert with his unnamed pet  wolf. His commander rebukes him over his “lone wolf attitude” and orders him to take on a Texas State Trooper as his partner. McQuade is subsequently thrust into meeting the main antagonist of the film, Rawley Wilkes (played by David Carradine of Kung Fu). Unbeknownst to McQuade, Wilkes is not only a martial arts expert, but also an illicit arms dealer. One thing leads to another (with the help of several supporting characters), and McQuade ultimately discovers Wilkes’ illegal and deadly activities. When Wilkes ultimately makes things personal against McQuade and his family, it leads to a predictable, yet nonetheless entertaining martial arts showdown between the two at the conclusion of the picture.

This was not Norris’ first epic confrontation on screen. In 1974 he faced off against the master, Bruce Lee, in Return of the Dragon. 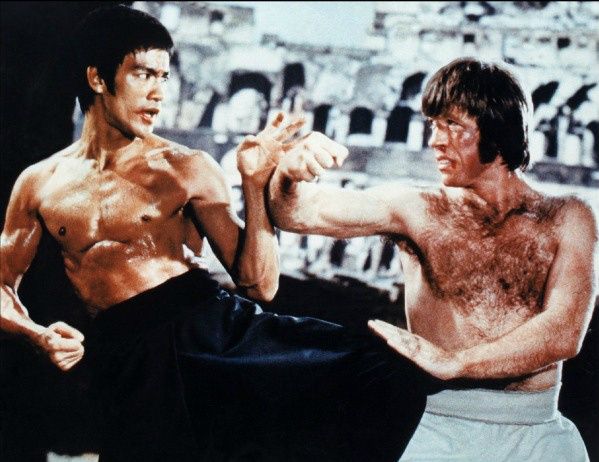 Had Lee still been alive when McQuade was being cast, he would have been offered the part of Rawley Wilkes, instead of David Carradine. “The rematch of the century” is how the producers would have marketed the film. Sadly, it wasn’t in the cards since Lee had passed away. Ironically, the Kung Fu television series was Lee’s idea, but was stolen by Warner Brothers who cast Carradine in the lead role in his stead; so Carradine obtained two roles originally intended for the great Bruce Lee!

All of this adds much context to the final contest between McQuade and Wilkes. There was apparently some behind-the-scenes animus between Norris and Carradine; perhaps because of Norris’ admiration for and friendship with the late Bruce Lee.

This resulted in the two not pulling their punches as much as they should have during filming, according to director/producer Steve Carver. In my humble opinion, this added to the believability of the showdown, and helped to balance out the cheesiness of the accompanying score by Italian composer Francesco De Masi (complete with a pipe organ, chorus and swelling orchestra in the spaghetti western style of Ennio Morricone).

As for the supporting cast, they were not a bastion of Shakespearean thespians by any stretch. However, these actors and actresses were more than sufficient for an ’80s action film….

Not surprisingly, Lone Wolf McQuade was the inspiration for the Walker, Texas Ranger TV series. This also starred Norris, in a similar but more subdued role.

I remember very vividly the rainy day in April 1983 wherein my high school friend Charlie and I made the trek (in my 1972 AMC Gremlin) to Cobb Center Theater in Marietta, GA to see this movie on the big screen for the first time. It quickly became a part of my home video collection months after its release. While many may think McQuade makes Flashdance look like Citizen Kane, it remains a favorite of mine after all of these years.

So yes, with a great deal of ’80s cheese, I choose Norris over Nouri.